No, I don't scrapbook the very moments of disappointment and disaster. Only when it's funny, as Jessica Rabbit would say.

Friends and avid readers (OK, those are the same thing) will have noticed a recent foray into pocket style scrapbooking about which more later. Or you can take a peek at my new website Easy Pocket Scrapbooking. It's not all there yet as the W word is getting in the way but you get the general idea and yes, I am doing some of the paper version too and no, I'm not getting involved in the P365/P52 malarkey.

Here's the left hand side of DH John's Grand Day Out at the Bournemouth Air Festival. It's full of hope and excitement with the obligatory walking away shot. I wanted that to be a big photo but it looked a tad dull so I added the word art overlay by Karla Dudley's Anywhere frames set. She is so good at these, I have several sets. You can get them at Pixels And Company. I recoloured the PNG file in PSE 11 (easy peasy, I'll do a tut when I have time) and then I added a shadow which is no doubt against the rules but Rules Schmules. Add a shadow to anything you like. If it looks good leave it, if it doesn't then you can undo it. I really don't know why the self appointed Rule Makers make such a big deal about shadows. 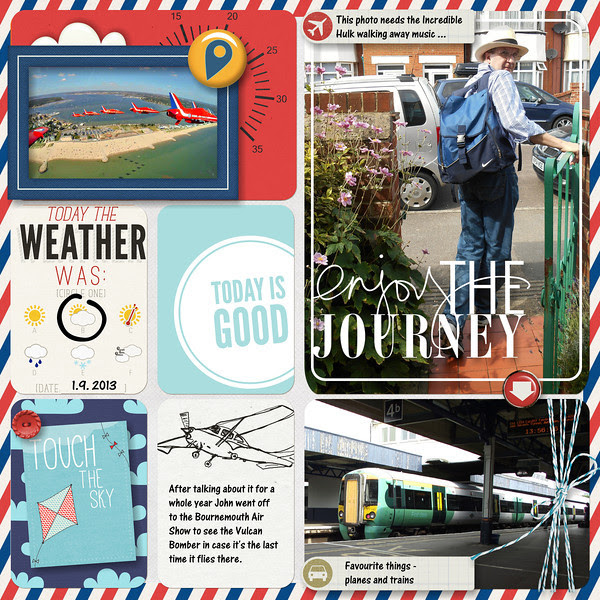 Now where to begin with the credits for these pages ...I used mostly Digital Design Essentials' Par Avion and Sarah Sullivan's Fly Away With Me. The weather card is from Sahlin Studios'/Britt-Ish Designs' Mouse Project and I used a few elements from Scrap Orchard's August 2013 Mega kit Friendly Skies. I used a striped background paper from the Par Avion kit then added a smaller plain paper on top to get the frame effect.

So on the right hand side it all goes wrong for poor John :( 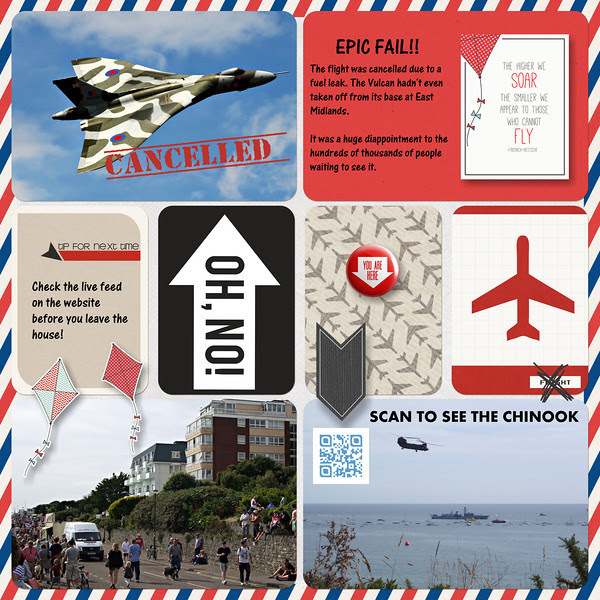 Let's hope the Vulcan does fly again. They said it wouldn't fly again last year but it did. John did at least get a video of the Chinook and you can see that by scanning the QR code. It's the first time I've added this to a layout. It was very easy, you can get your code at Unitag and it can link to anything you like, it doesn't have to be a video. I ignored the whole idea of QR codes on layouts for a long time as I thought for some reason they could only go to videos and you can count the videos I've made on one hand. Most of those are the "what's the matter with this camera, why is it taking a video?" kind of videos  that require much bleeping out!
Posted by Sharon Horswill at 12:31 No comments:

Newsletters - Love Them or Hate Them?


What about newsletters?  Do you love them or hate them?  I have mixed emotions myself.  Each morning I scan down the email list from scrapbook stores and designers.  I'll usually pick out the ones I don't want to miss and leave the others for later or delete them altogether.
I get a couple of store newsletters that I really like.  One is the home of several of my favorite designers.  I love getting their weekly newsletter to see all the new releases.  The other usually includes a personal story of life in Germany by the store owner stationed there.  I look forward to her stories and her great photos.
There are a lot that give wonderful, high quality freebies.  I'm thankful for those.  Be sure to check the quality before having anything printed though.  It's very disappointing to get a scrapbook printed then find out some pages were created using low quality freebies that don't print well.
I prefer a clean, uncluttered look.  I don't like extremely busy ones  with ads from beginning to end of a very, very long newsletter.  Especially if they're  two or three columns wide!  It's like they're trying to put half of their store in every newsletter.  Ugh!
But most of all, I don't like the ones that really have nothing to say; they just want to say they put out a newsletter!  Mission accomplished.

Posted by Sharon Horswill at 00:21 No comments: