Making the most of what we have ...

I'll get to something deep and meaningful in just a moment, it being the end of the year and all that, but first I'll show you some pages I made recently:

Romsey is a little town near us with the best Waitrose (expensive food store for those across the pond) for miles around. We went to get the week's shopping and noticed signs about roads being closed. So we parked in Waitrose and walked through to the square where the Christmas lights were going to be turned on. Unfortunately it took ages and we had to get back to the store before the lights went on. We took some rubbish photos. No matter, here's a page made with Raspberry Road's Christmas in the City which includes a gorgeous Bokeh Papers pack. If I'd know this earlier I might have tried to get some better Christmas shots! Click on any photo to see a bigger version in a new window. 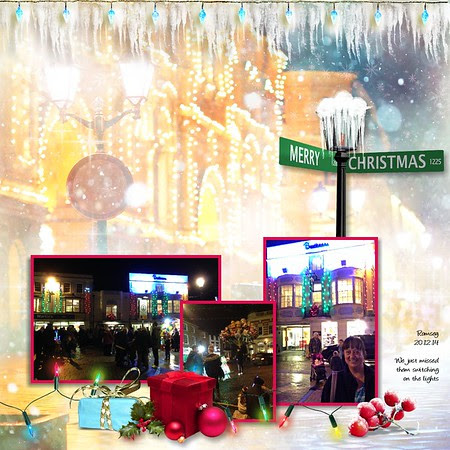 We had a Christmas market in Southampton town centre this year as every year. A depressing Facebook group I was in - note "was" as I now leave anything not uplifting - did nothing but moan about the market and how Southampton isn't Christmassy enough so we went to have a look and had a lovely evening. Best of all I got a Monty tote bag free in John Lewis. Yay me! I think they were for people buying iPads and I was only buying a £25 phone but the assistant was keen to get rid of me and go on her break and I don't blame her as the store was packed.

Here's the page made with Kristin Aagard's Christmas Lights: 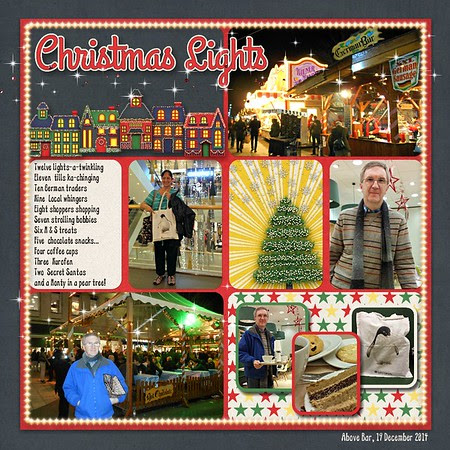 One thing we did learn in our Failed Christmas Lights trip to Romsey was the date of their carol singing. Again photos were rubbish but the sly cropping of a regular photo into a panorama made them less so and, hey, we were there! Kit is Melissa Bennett's Tis The Season, template is from Traci Reed's 365 Unscripted Stitched Grids 7. 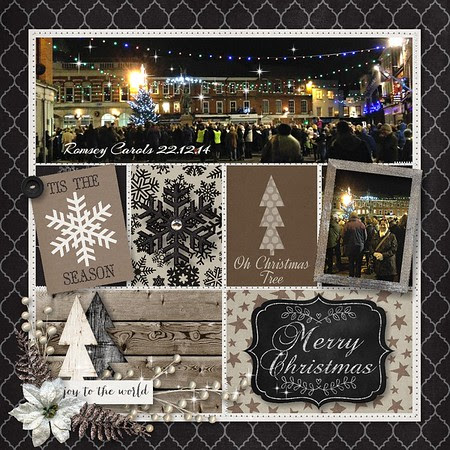 So is there a not-so-hidden point to the title of this post?

In common with many of my scrapping friends I have far too many kits and other scrapping stuff and there is no need to buy any more. I should make the most of what I have. Indeed I'm sick of everyone trying to sell me more at every opportunity, and not even timely stuff. Christmas kits were being sold in November. Correct me if I'm wrong but don't you need to take the photos before making the pages? Are we scared the internet stores will run out of kits? We had New Year kits well before Christmas. By the way, designers, "Happy New Years" doesn't even make any sense in the UK. It appears to beg for an apostrophe, needs to lose an s and/or ends mid-sentence. Don't get me started on the way you leave money on the table by not considering what other nations say.


Yes, of course I'll fall off the wagon at some point but I'll save money, save computer space and actually use the kits I already have.

Have a wonderful 2015 full of good memories and new friends!
Posted by Sharon Horswill at 22:49