A Chair With History

Today I wanted to make a layout with a chair. Like you do. This Lloyd Loom chair was the first thing my parents bought, along with a matching linen basket, for their new home when they got married in 1949. I say new home but in those days that consisted of what my Mum called "Furnished Rooms" so I suppose it was nice to have something that was actually theirs.

As you can see Mum and Dad thought it was hilarious to have a photo of me sitting in the chair holding a bottle of gin. I suspect that was Uncle Ernie's doing and he would have been the one with a camera.

When we got married Mum and Dad gave us the Lloyd Loom set and we painted it dark green (it was Olive green before) to go in our bathroom. The linen basket has remained green - and we actulaly use it as a linen basket - and the chair has been painted blue. This might  be its last incarnation as it's a pain to paint!

So why on earth am I making a layout about a chair? Well, apart from wanting to share the thrilling story, today Photo word of the day on the Digi Scrapping Freebies group is "chair".The challenge is fun to do and you can use pages you've already made. There's nothing worse than having to make a page each day when you don't have time. So it's not a P365 thing. I can't abide those. But that's the subject for another long rant another time.

This layout was made with Lindsay Jane's Essence of Blue MMS template. 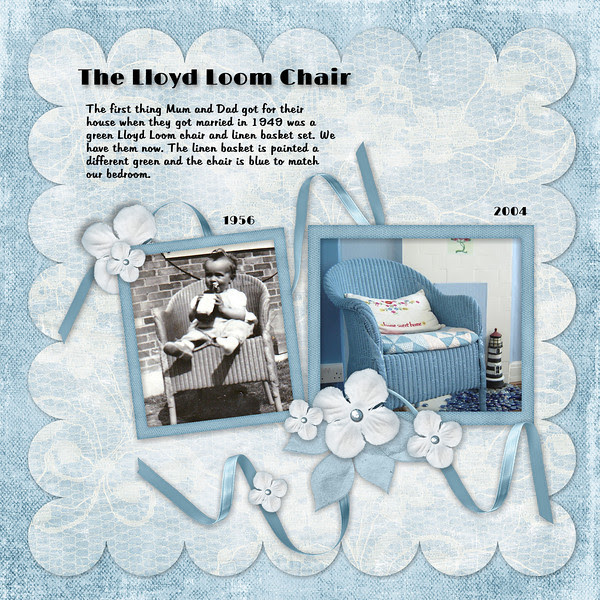 Posted by Sharon Horswill at 00:42